Axie Infinity is one of the leading play-to-earn (P2E)crypto games with a high-performing P2E asset, AXS. But recently, the token has plunged below its support range, and as of 13 June 2022, it stands at only $13.20 . According to Coingecko, last year, AXS recorded its all-time high value of $164.90, and now it's gone down by 90%. Besides, Axie Infinity price predictions for coming years forecast a declining market.

The reason for its downfall isn’t only the bearish market outlook. Several other factors are at play here - like cyberattacks and the shallow hype for P2E gaming. As an investor, you must be aware of these factors to gauge the potential of AXS. To give you an idea whether Axie Infinity will go up again or not, here are some insights!

Before making an Axie Infinity price prediction or any investment decision , it is important to learn about how its economy works. Axie Infinity is a blockchain-based game that deals in two digital tokens; Smooth Love Potion (SLP) and Axie Shards (AXS).

Like most P2E games, it is another idle game of the battle genre. In the beginning, players have to buy Axies to participate in the fights. For winning local fights, you can earn SLP, while tournament games would give you AXS, which is a more valuable token.

You can also get Axies by breeding them. If you already have two Axies, you can breed them to get another one with abilities of both. In addition, you can also acquire SLP and AXS through crypto exchanges for trading.

However, the value of both tokens depends on the demand of the Axies in the game. If the demand is low, players can trade their digital assets on different exchanges. This, in turn, negatively impacts the tokens’ price. 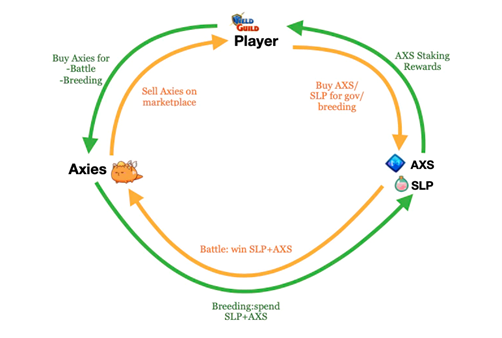 According to DigitalCoinPrice’s Axie Infinity price prediction, at the end of 2022, it doesn’t show much rise and will be averaging $20.52. Moreover, the data indicates that in 2025, AXS's price will only reach $29.48. Comparably, till 2030, the coin does not seem too bullish as its average value in that year will likely be around $70.32.

Why the sharp decline in Axie Infinity’s value?

The overall bearish trend in the crypto market can be one of the factors for Axie’s decline. However, there are two other primary reasons for its sharp decline.

But the game recently introduced its latest version, Axie: Origin, which doesn’t involve the AXS or SLP tokens. Though they have improved the gameplay and graphics of the game, claiming to cater to the non-crypto gamers, the version has failed to attract the masses. Currently, Axie Infinity has around 18,000 active players. This player count has seen a slump from over 70,000 at the start of the year.

Because of these hacking attempts, gamers are becoming more sceptical towards Axie Infinity. Investing in such an ecosystem is quite risky; that’s why investors are hesitant to invest their money.

Is Axie Infinity a good investment?

The current Axie Infinity price predictions are in red, and its value is diminishing abruptly. It hasn’t shown any stability lately, which means higher volatility. Moreover, the overhyped P2E mechanism and the cyberattacks on its blockchain make it a risky investment.

Nonetheless, there are some bullish Axie Infinity price predictions suggested by some analysts, too. If you’re considering investing in AXS, it’s better to conduct your research. Only invest the amount you can afford to lose and take the advice from your financial advisor before making any decision.

What is Payeer and Why are People Using It?

What is DappRadar and Why Do You Care?