The controversial cryptocurrency, Tether, is going to launch another stablecoin which will be made available on the best crypto exchange offerings in the UK. It will be pegged to the UK pound like Tether (USDT) is to the US Dollar. Previously there have been numerous coins pegged with different fiat currencies like US Dollar, Chinese renminbi, Mexican peso, euro, and others. 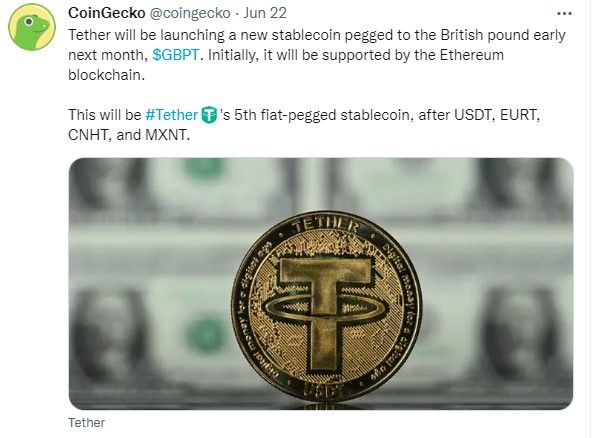 Pound-pegged stable coins will be available on the best crypto exchanges in the UK, including Binance. However, in the beginning, GBPT will be launched on the Ethereum blockchain in July.

The launch of the UK pound pegged stable coin It further promotes stable cryptocurrencies. Moreover, it will help transform the UK market into a crypto hub. The chief technology officer of Tether, Paolo Ardoino, says that he believes “the UK to be the next frontier of blockchain.”

After the Terra Luna debacle, there has been a significant decline in using USD-pegged stable coins. Therefore, if executed correctly, it can be an attempt to revive stable digital currencies, restore trust and accelerate mass adoption.

Moreover, Tether’s rival, Circle Internet Financial, which introduced the stable coin USDC (USD Coin), recently announced the introduction of a token pegged to the European currency. Circle’s coin is named Euro coin (EUROC), which is backed from Euro-dominated reserves. Closer to home, in the Isle of Man, where MoniTalks is head quartered, Blackfridge is developing a poundtoken too.

This token is also looking to counter the efforts of UK’s Central Bank Digital Currency (CBDC), which is a state-issued stable token. Moreover, the Bank of England is already discussing the introduction and regulation of stable coins in the market; this can be an opportunity for Tether’s UK pound-pegged coin to make a mark.