The largest crypto exchange, Binance, suffers massive withdrawals as the platform experiences outflows of more than $1 billion in 24 hours.

Currently, it is surrounded by FUD and rumours that are affecting its position in the market.

Binance CEO and co-founder Changpeng Zhao (CZ) took to Twitter to clarify the situation. He said his firm saw more than $1.14 billion of withdrawals on Tuesday. He further stated that these outflows were not the highest they processed and called it "business as usual." Meanwhile, customers are continually removing their assets from their accounts.

Analysis by blockchain analytical firm Nansen shows that this is the highest level of withdrawals in a day for Binance since June. The report also claims that the total withdrawals for the exchange have been more than $3 billion. 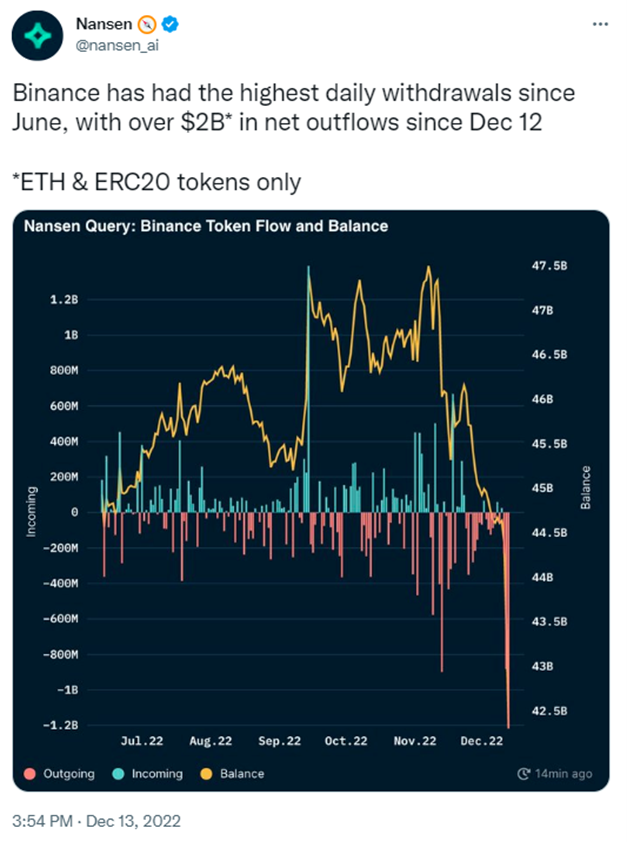 It is contrary to the figure that CZ announced on Twitter. It could be an act of downplaying the situation like FTX previously did. Nonetheless, Binance is currently fighting against investor jitters in this crypto winter.

FUD in the market

Since the collapse of Sam Bankman-Fried’s FTX, FUD has taken over the market. On Tuesday, Sam was arrested for fraud, considered one of the largest-scale financial scandals in US history. The FTX contagion has spread over the entire crypto market. It has damaged many digital asset firms like BlockFi, Gemini, and Genesis.

Moreover, an ongoing investigation for money laundering against CZ’s firm is also making headlines. According to a report, the US Justice Department is contemplating filing a case against the exchange’s executive body, including CEO CZ.

People are hesitant to invest and are withdrawing their assets in panic. As Binance suffers, the market is continually seeing a downward trend. Amid this scenario, outrageous outflows from the largest exchange signify a long winter.