The high energy consumption of blockchain has become a topic of heavy debate over the past few years. Let's critically analyse whether blockchain's energy usage is really a threat to the climate!

Blockchain is touted as the most disruptive technology for data transparency in ledgers. It is being used in several industries for governing transaction procedures in a decentralised way. Though technology has revolutionised the world economy, blockchain often faces criticism for consuming large amounts of energy.

Since the origination of the blockchain, its energy consumption has been questioned by many environmentalists. Undoubtedly, blockchain energy expenditure is relatively high. But does higher consumption necessarily imply more harm to the climate?

Various widespread misconceptions about blockchain energy hold us back from using it as a secure payment gateway. To ensure blockchain smart transition in businesses, here we've demystified the FUD surrounding blockchain energy!

Blockchain technology is mainly used for cryptocurrency mining. Since Bitcoin is the largest and oldest currency, its mechanism, PoW (Proof-of-Work), is often perceived as the only viable mechanism. And as PoW has a high energy consumption rate, environmentalists view it as a massive danger to the climate.

According to many environmentalists, blockchain technology should be halted as it can cause a threat to the climate. Previously, there also have been discussions about its ban in the European Union. Moreover, cryptocurrency critics use this misconception as an argument to outlaw the crypto market. But this argument is based on several myths and misconceptions about blockchain energy consumption, which must be addressed.

Here are the most common and problematic misconceptions about the energy expenditure of blockchain technology.

Firstly, calculating the amount of energy required for blockchain is easy and doable as you can find the hash rates. However, calculating the carbon emission against it is quite arduous. Because here, you would need to know what energy sources different crypto miners are using and what their hardware specifications are. That's why the estimates for carbon emission are incorrect.

Secondly, not every crypto miner uses fossil fuels as energy resources. Many opt for renewable sources for uninterrupted energy supply and efficiency. Data shows around 28% to 74% of energy for Bitcoin mining comes from renewables.

But the truth is blockchain does not require energy for transactions. Blockchains consume energy only for mining, which involves solving a puzzle in the PoW algorithm. That's why considering the amount of time required for transactions for calculating energy consumption is unnecessary.

PoW is only one of the many consensus mechanisms used by blockchains. Its widely known energy-efficient alternative is Proof-of-Stake (PoS). Ethereum blockchain is one of the most popular blockchains that runs on this mechanism. It mainly involves maintaining the electronic ledger for the number of tokens the node holds.

Besides, there are various other energy-efficient options like Proof of History (PoH), Proof of Action (PoA), Proof of Capacity (PoC), or Proof of Burn (PoB). Therefore, blockchain technology is not limited to PoW.

The main reason behind this argument is the lack of clarity regarding blockchain technology and how it can help transform our businesses. The 'decentralised and secure ledger' is often misunderstood by the masses. So, they mistakenly consider the entire technology a scam.

But, Bitcoin is not a utility token due to its slow transaction rate. Also, there can only be 21 million Bitcoins ever. So, increasing its popularity would not necessarily mean increasing energy consumption. Moreover, as of now, the annual energy consumption by Bitcoin networks is only 84.70 TWh. At this rate, Bitcoin mining does not possibly threaten the environment.

Blockchain energy consumption: Is it really a concern?

The Proof-of-Work consensus mechanism for blockchains is not the only viable option. Various other algorithms can now work to maintain transparency in the blockchain. However, PoW is the most reliable one as it is highly secure and requires intensive energy for this purpose.

The main reason is that you cannot rely on fossil fuels or other traditional ways to produce this much electrical energy. That's why renewable sources are used to keep the costs to a minimum and minimise Carbon footprints. Around 28% to 74% of the Bitcoin miners use renewable resources for producing energy. And as they set up private grids, it does not affect energy distribution through public grids. 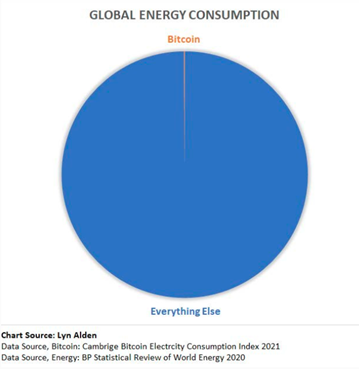 How can blockchain be energy-efficient?

Environmental sustainability is one of the unavoidable concerns for humanity today. Therefore, many measures have been taken in various fields to reduce energy consumption and carbon footprints. We can also observe considerable work in blockchain technology for decarbonisation.

Blockchain can not only be energy-efficient, but it can also work for clean energy. One of its examples is its use as a smart electricity metre. Smart metres can shape a decentralised infrastructure for monitoring electricity production and usage.

Blockchain technology is a revolutionary innovation that can transform the way we do business. It can help us bring transparency and security to our everyday transactions. But unfortunately, there are a lot of misconceptions and vagueness around blockchain energy consumption, which results in sluggish growth of the technology.

This article demystified some of the most common misconceptions about blockchain energy expenditure. To sum it up, blockchains are not dangerous to the climate as there are various consensus mechanisms other than PoW that consume less energy. Most blockchains also leverage renewable resources for energy production, minimising their carbon emissions.