The Cardano (ADA) network welcomes a new update, Vasil. After the Ethereum Merge last week, on Thursday, September 22, the Cardano hard fork was successfully released. It is the most significant upgrade on the blockchain since last year’s smart contract update. It is likely to enhance the capability and performance of the blockchain.

Charles Hoskinson, the co-founder of the network, announced the deployment of the Vasil in a live Twitter space. Meanwhile, Input Output Hong Kong (IOHK), a blockchain firm, also proclaimed the procedure’s success.

In a tweet, the firm said the launch took place at 21:44:00 UTC and collaborated with the Cardano foundation. 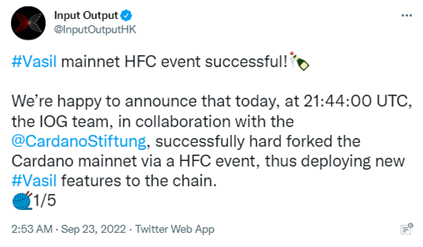 What is the Cardano hard fork upgrade?

A hard fork is a blockchain split that results in two branches of the same protocol. It validates previously invalid transactions and blocks or vice-versa to develop a new version. There can be several reasons behind this update, like the performance limitations.

In Cardano’s case, the Vasil update improved the network’s performance. It is to enhance the transaction speed and lower the transaction cost. Moreover, its Plutus smart contract will be upgraded to improve the decentralised applications.

Though the Vasil has been deployed, the full features of this advancement will be accessible to the developers after September 27, as the upgrade is a lengthy five-day procedure.

Before it went live, Charles Hoskinson said that the Cardano hard fork is one of the hardest to execute for the developers. This is the reason it got delayed and rescheduled several times. Initially, it was planned to take place in June but got postponed because of bugs in the mainnet causing compatibility issues.

Kuji coin - and its three applications