The Chamber of Digital Commerce is an advocacy group and trade association for cryptocurrencies. On Monday, the firm published a report, The Crypto Conundrum: Why Won’t the SEC Approve a Bitcoin ETF? In this report, the organisation has urged the Securities and Exchange Commission of the United States to approve the Bitcoin ETF.

The trade association argues that even though the demands for exchange-traded funds (ETF) are met, the SEC is reluctant to approve them. Earlier, the SEC also rejected the Grayscale ETF application. However, the company sued the regulators, and the case is still in court. Amid this, the Chamber of Digital Commerce has made a public argument for bringing Bitcoin spot ETFs to the US.

The organisation argues that the US regulators are blocking the way for BTC spot ETFs in the country. Many companies in countries like Canada and Australia are already providing related services to their investors. On the other hand, in the US, regulators have rejected the applications of 16 companies.

“As the SEC continues to stonewall, the United States falls further behind other countries as capital that would have been invested in the US and managed by local firms employing American citizens is instead deployed in other, more innovation-friendly countries,” the firm explained.

In the report, the organisation further claims that the companies have complied with all the demands of the SEC, yet their applications are rejected. Moreover, it argues that denying the applications would not help protect the investors. Instead, it will force them to go with non-regulated options. 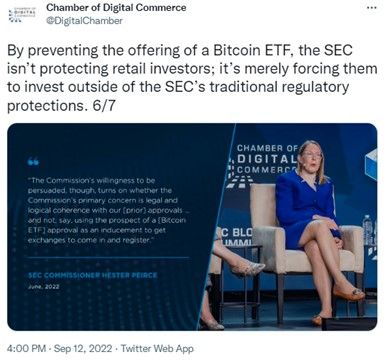 The organisation also made some allegations against the SEC’s chair Gary Gensler. The report argued that expanding the regulatory authority is a move for a “jurisdictional land grab.” Moreover, the report said that Gensler’s position restricts the communication between the regulatory body and the digital asset service providers.

Kuji coin - and its three applications