One of the best crypto exchanges, Coinbase, is involved in legal action against the US Treasury. Coinbase CEO, Brian Armstrong, revealed that the company is backing a case against the Treasury Department for Tornado Cash sanctions. Six people brought this lawsuit, and the exchange is funding it. Tornado Cash is free software that is available on the Ethereum blockchain. Its protocol ensures privacy by allowing you to use different addresses for deposits and withdrawals. That’s why it enables users to remain anonymous while making transactions.

Last month, on the 8th of August, the exchequer department put sanctions on the smart contracts of Tornado Cash. This was because its technology was used for criminal activities, especially by North Korean hackers.

The department and the Office of Foreign Asset Control (OFAC) took action against many addresses involved with the software. It was to stop cyber criminals from laundering money outside of the US OFAC asserted that many criminals are using this protocol to escape from the authorities. Therefore, limiting the use of this protocol became inevitable.

Coinbase CEO views on the sanctions

In a blog post, Coinbase’s CEO and co-founder shared his views on the lawsuit. In the blog, he maintained that action against bad actors is necessary. However, sanctioning the technology is not the right step as there are many legitimate uses of this technology. 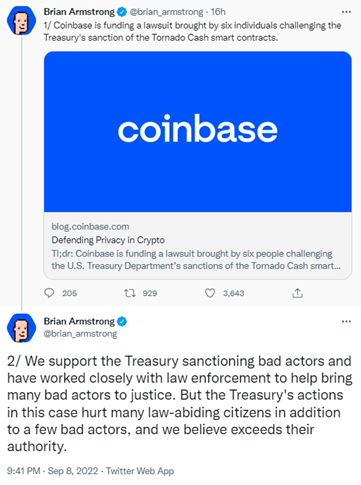 Armstrong also indicated two significant problems because of banning the entire technology. One, many users might lose their funds on the protocol and be unable to use this privacy tool. Secondly, he mentioned that the Treasury had exceeded its mandate, which Congress defines.

The CEO of Coinbase further pointed toward the use of the privacy tool by individuals involved in the case. He claimed that individuals are protecting their privacy when donating to Ukraine’s cause, hiding their online presence, and for personal safety. This action can limit innovation, and many will likely lose their funds.