There is one cryptocurrency you may not have heard of but is sure to make a big splash in 2022 and beyond.

Hedera Hashgraph describe themselves as a third generation cryptocurrency platform which uses Direct Acyclic Graph technology instead of the regular blockchain often associated with Bitcoin and Ethereum. What this means is that Hedera Hashgraph can process 1000’s more transactions at lightening speeds at little to no cost and with Smart Contracts about to be launched on the platform you can expect to hear much more about Hedera Hashgraph in the weeks to come.

An enterprise grade network platform for Web 3.0 and beyond

The brainchild of Dr Leemon Baird, Hedera Hashgraph is currently the most used, sustainable enterprise led public network allowing businesses and individuals to create decentralised applications (dApps) on the market today. The platform has been designed to be fairer and more efficient therefore circumnavigating some of the issues faced by more traditional networks on offer today. The statistics speak for themselves - 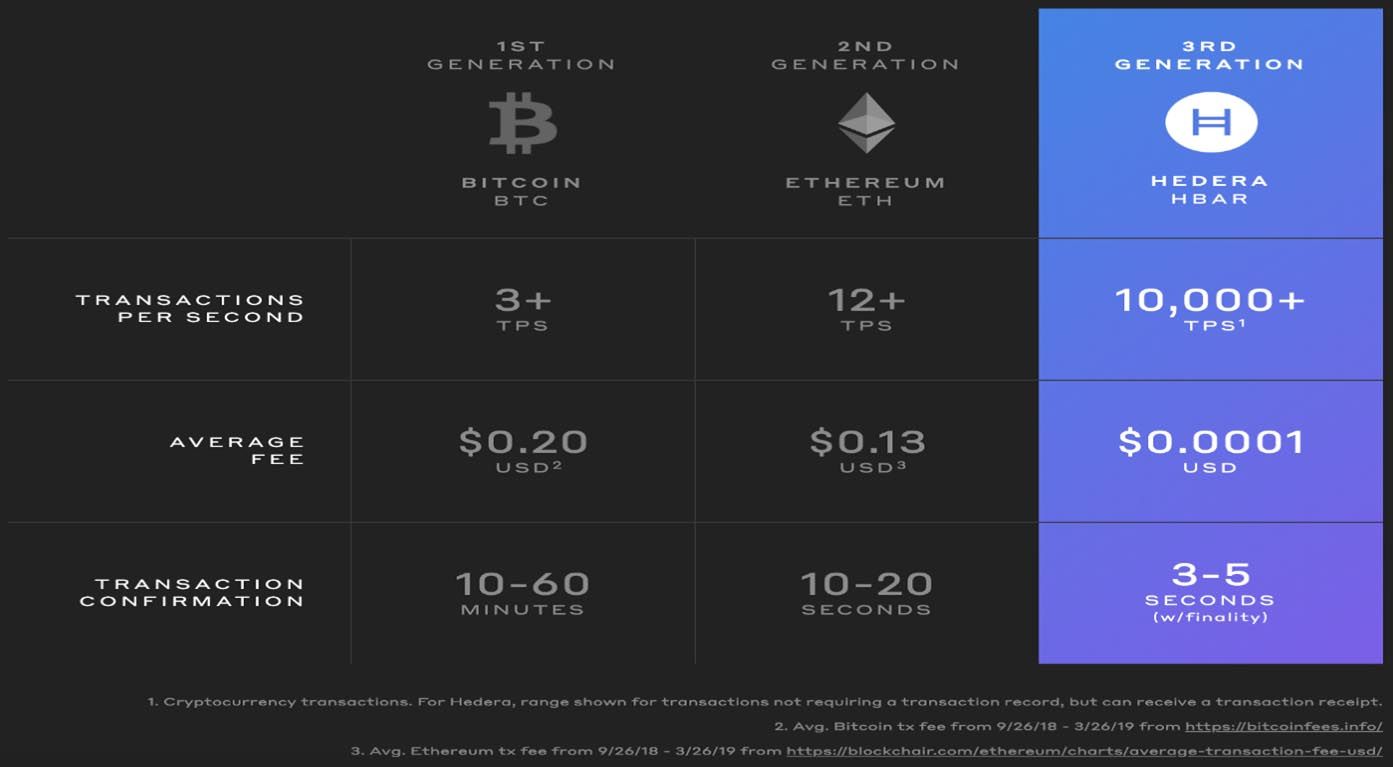 Funded through an ICO in August debate and decide 2018 Hedera went live in September 2019 and to date almost 50% of its 50 billion native tokens (HBAR) are in circulation. HBAR is the fuel that powers the Hedera network allowing users to access a myriad of Web 3.0 applications such as smart contracts, file storage and more general transactional services. With rumours of HBAR staking becoming available to the public soon 2022 is shaping up to be quite a year for Hedera Hashgraph.

What sets Hedera apart from some of its competitors is its gossip protocol. In short, this unique network structure ensures that nodes only have to confirm the most minimum details passed to them from the previous nodes. This then of course ensures lightning-fast transaction times and much lower costs than competitors.

Like Ethereum the Hedera Hashgraph is responsible to a Governing Council of members which support the decentralised aims of the project via the management of network nodes as well as participating in governance rights. With companies as large as Boeing, Google, LG, Avery Denison and IBM already on the council it is easy to see why Hedera has such a promising future.

Super-fast speeds and little to no cost

As I mentioned earlier, Hedera Hashgraph does not use a conventional blockchain model and instead relies on a Direct Acyclic Graph (DAG) framework which many cite as the third incarnation of the blockchain. Essentially a Proof of Stake network at heart the main difference between DAG network and traditional Proof of Stake models is the ability to scale and provide extremely fast transactions at little to no cost.

The average transaction fee on Hedera is $0.0001 and finality (completion) is reached in under 5 seconds. As the above table shows Hedera has the ability to process 10,000 transactions per second which when compared to a Proof of Work model shows there is just no comparison, that being said, is it any wonder some of the world’s biggest names have chosen to become Hedera Governing Council members?

Crypto as software not an alternative to money

The main use cases for the Hedera network cover the all the major markets in crypto today. The Hedera platform is able to -

• Provide a token service allowing users to mint NFTs with just a few lines of code.

• Provide a consensus service which acts as a layer of trust for any application built upon it.

• Allow developers to build DApps through the integration of smart contracts.

Just last Friday, Google Cloud announced their plans to provide cloud file storage solutions to the crypto industry in particular to Hedera, Theta and Dapper Labs. The fact that Google is a Hedera governing council member underlines how much interest both parties have invested in providing the network platforms of the future.

Famed celebrity ‘Shark Tank’ investor Kevin O’Leary recently stated crypto has evolved into software rather than an alternative form of money although it has to be said many people understood this from day one. O’Leary said of Hedera “Great team, good engineers. What’s the economic premise that would keep that growing? Boeing want a quasi-centralised/decentralised platform, they want the best of both worlds. HBAR can deliver that, check the box

Mark Harridge first came across Bitcoin and began to use its peer-to-peer payment network in mid to late-2011. He quickly understood that this technology would change the world. Mark is passionate about crypto adoption, from a macro economic and institutional perspective, and the numerous factors that fuel the relentless march towards individual self sovereignty and the decentralised society of the future.

SEC vs Ripple case influence on XRP price in UK