Kraken Review: All You Need to Know

This Kraken review will zero in on margin trading with the US-based cryptocurrency exchange.

Margin trading allows customers to leverage their bets using funds they do not own. The advantage of this trading strategy is that it can significantly improve profits while putting less money at risk.

However, it is also worth mentioning that it has the potential to amplify losses rapidly. Leveraged trading enables investors to open more leveraged positions than their current balance. Kraken advances funds over what the investor currently has in their account.

To start a margin account, the user's broker is legally obligated to acquire their permission. The margin account may be included in the usual account opening agreement or it may be a separate agreement.

Margin trading is also more versatile than other sorts of lending. There may be no set repayment timeline, and the user's broker's maintenance margin requirements may be straightforward or automated. Most margin accounts are open until the securities are sold. At this point, final payments are often due to the borrower.

To margin trade on Kraken, users must go through several order types based on where they believe the market will move. The buyer can open long or short trades and close them using opposite orders or settling commands.

One detail that needs to be known is which cryptocurrencies Kraken supports for margin trading and the leverage levels at which customers will be allowed to deal.

Kraken offers varying amounts of leverage depending on the cryptocurrency the investor wants to trade.

As a result, the allowable leverage varies depending on the base and quoted currencies. The following table lists all of the cryptocurrencies currently accessible for this type of trading and the leverage levels that are available for each one: 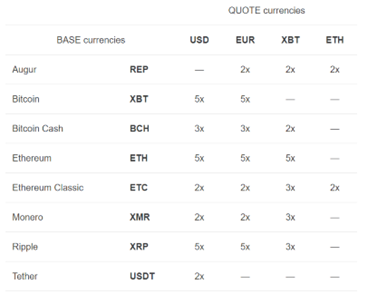 Kraken Review: How to open a margin position

When a user opens a position, they receive advance cash (the margin) to assist them in executing a leveraged trade.

In general, positions can be opened in two ways, depending on whether the investor wants to go long or short.

If users want to open a long trade for ETH/EUR, the Kraken exchange will advance EUR to buy ETH.

If the customer wants to open short trade, they will advance ETH so that the user can sell it for EUR.

To enable margin trading, the user must log into the account, navigate to the "New Order" page, and select "Intermediate." 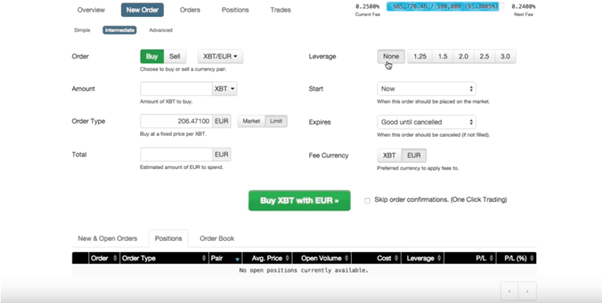 The above screenshot illustrates that the user can purchase or sell using the specified leverage on the right. For example, if the consumer selects to employ a leverage amount of 3, which is 3:1, tripling their purchasing power.

If the user wants to go long, they must first place a buy order, as described above.

Kraken review: How to close a position

As previously stated, when users use leveraged margin positions, trades are conducted with an advance funded by Kraken.

Users must return all the monies advanced to the exchange to close a trade. To close a trade, the user must create an order inverse of the opened order they wish to complete.

There is a long open position for Bitcoin in the previous screenshot. It indicates that the order type is "buy/market," indicating that the position is long. It selects the best available market order rather than aiming for a specific price limit on the order book.

The investor would have to create the opposite transaction to close that position. 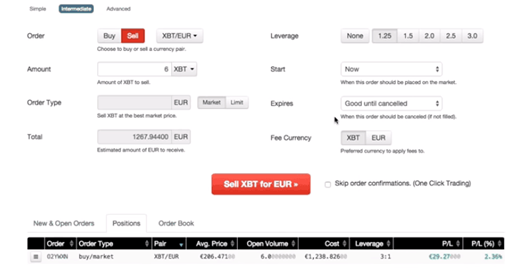 Since the position that needs to be closed is a "Buy," the user must select the "Sell" option on this screen. They also must choose leverage; otherwise, their funds will be sold at the best market price.

After picking leverage, all the user has to do is click the Sell XBT for EUR button, and the trade will be closed, adding or discounting their balance with the profit or loss made on that transaction.

Kraken review: How to settle a position

Margin trading, as previously stated, is carried out through Kraken advances. As previously mentioned, one method for closing positions is to execute an opposite transaction.

The second method is for the trader to return the advanced funds immediately from his account without engaging in a trade, known as a position settlement.

For example, here's what you need to do to settle a long position.

The user must pick the advanced option from the top menu to generate a Buy settle position order.

The user then chooses the amount to settle and the level of leverage. The order type should be "Settle Position".

The number of cryptocurrencies settled will be purchased using the chosen currency from the user's account at the price at which the position opened.

Regarding margin trading on Kraken, the user must be aware of two types of costs. These are the "opening fees" for creating a new position and the "rollover fees" for keeping an existing position open.

Both depend on the base and quote currencies. The initial cost ranges between 0.01% and 0.02%.

The rollover cost, on the other hand, is payable every four hours and varies depending on the cryptocurrency trading pair selected by the customer. It ranges from 0.01% to 0.02% every four hours.

Margin trading on Kraken can be advantageous, allowing users to increase their profits if the right trade occurs. The platform has several advantages, but users must also note that losses might multiply.

It's vital to remember that margin trading is considered high-risk, with significant losses possible if the trade doesn't go as planned. As a result, it's critical to recognise the risks of this form of trading and act cautiously.

7 years experience within the financial services sector most notably in Sales, Trading, research and writing articles within the crypto space. I have a bachelor's degree in International Business and a Master's in Investment and Risk Finance . I am also an associate member of the Chartered Institute for Securities and Investment.