Olajide Olayinka Williams "JJ Olatunji", better known as KSI, is a British rapper and YouTuber. He began gaining followers in 2009 when he launched his youtube channel and began posting video commentary on the FIFA video game series.

After 12 years, the 28-year-old artist now has over 37 million subscribers. He's been named to the Sunday Times' Top 100 UK Influencers' and Tubular Labs' 'UK's Most Influential YouTube Creators' lists, and his channels have received over 8.5 billion views.

In his Twitter post, he tweeted: " I've given in and bought an NFT. A Bored Ape Yacht Club" 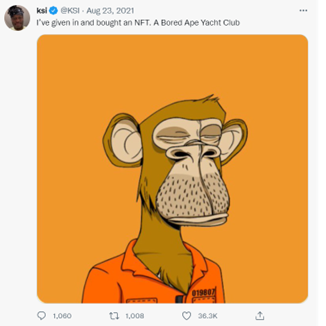 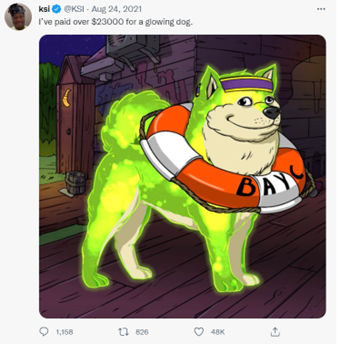 The British rapper had a hard time with crypto. He lost around $2.8 million in the Terra Luna crash. The rapper claimed he purchased 100,000 Terra coins when the price dropped and had decided to hold them for a long time. But, with the Luna crash, he lost almost his entire value of his Luna investment.

Before this, the rapper also claimed that he lost around 2 million pounds in crypto investments around Nov-Dec 2020, hoping to get good returns.

Crypto is a volatile space. It's always advised to conduct in-depth research before investing in the cryptocurrency market.