Liz Truss is set to assume the role of United Kingdom’s Prime Minister as she won the elections for Conservative party leader. Truss secured 57.4% votes for the position. On the other hand, her counterpart, Rishi Sunak, attained 42.6% of the votes.

Since 2021, she has served as Britain’s Secretary of State for Foreign, Commonwealth and Development Affairs.

Previously, since 2019, she has been performing the Women and Equalities Minister role. She has also been a member of the previous three premier’s cabinets, including David Cameron, Theresa May, and Boris Johnson. And now, she has become the country’s third female PM. 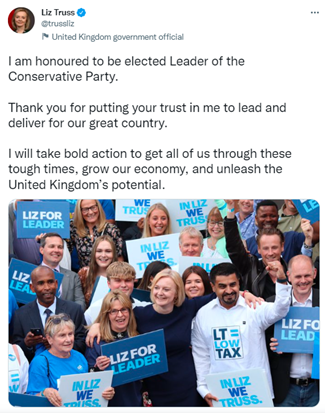 The new premier is known to be a supporter of digital assets. In 2018, Liz Truss, Prime Minister, advocated for welcoming cryptocurrencies without limiting their potential. Moreover, she also supported an anti-regulatory approach toward digital assets.

Besides, as International Trade Secretary, back in 2020, she set up a trading network for digital assets. It aimed to promote fintech business and several other measures for virtual currencies.

Though the new premier plans for crypto regulations have not been confirmed, investors are hopeful for positive measures. However, in her campaigning, she staunchly advocated for low taxes. Recently, she also vowed ’a bold plan’ for cutting taxes. She said, “I will deliver a bold plan to cut taxes and grow our economy.”

As the UK aims to become a global crypto hub, a pro-crypto PM’s policies can be helpful. As the next generational transfer of wealth will be digitally focused, it is imperative that the UK has a regulation that does not restrict innovation.

However, the country is also introducing harsh regulations on digital asset firms, especially those related to stablecoins. It would be interesting to see whether the new government officials will continue with that or if there will be an anti-regulatory approach.