According to the latest NEAR protocol news, the NEAR Foundation, the company behind the blockchain and dApp platform, announced a new partnership with Google Cloud. Google Cloud will provide technical support to NEAR grant recipients as part of this collaboration. 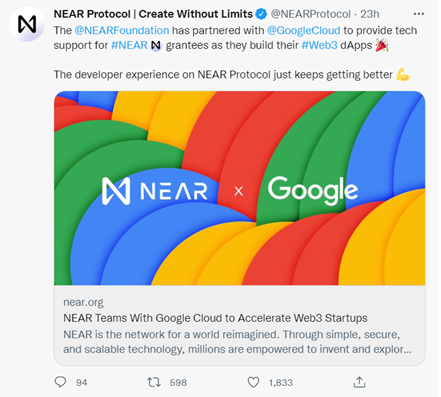 Carlos Arena, director of digital assets at Google Cloud, said in a statement that their company will provide Near developers a "secure, reliable, and sustainable cloud infrastructure on which they can build and scale" and that the company will continue to support "new products and services on blockchain-based platforms."

Near protocol is a layer 1one blockchain and dApp platform that works on a proof-of-stake mechanism. It offers developers a platform to create decentralised applications (DApps).

The platform is proud of its approach to blockchain applications, which is user-friendly, and it has grown significantly in the last year.

Pagoda is a startup platform, launched in February 2022. It provides Web3 developers on Near with a full-stack toolset for building, launching, and maintaining their Web3 projects or DApps on the blockchain.

The startup platform enables developers to quickly and easily launch DApps on NEAR through a library of pre-audited templates and automatically generated contract user interfaces.

Google Cloud is getting into the blockchain

In January, Google Cloud established a new digital assets team to support the development and evolution of the blockchain ecosystem. The digital asset team is dedicated to assisting customers in creating, trading, and launching new products on blockchain-based platforms.