Morehead said at a Singapore conference on Wednesday that the company's goal is to close the blockchain fund by May. According to reports, the fund will invest in digital tokens and equity to draw institutional investors. 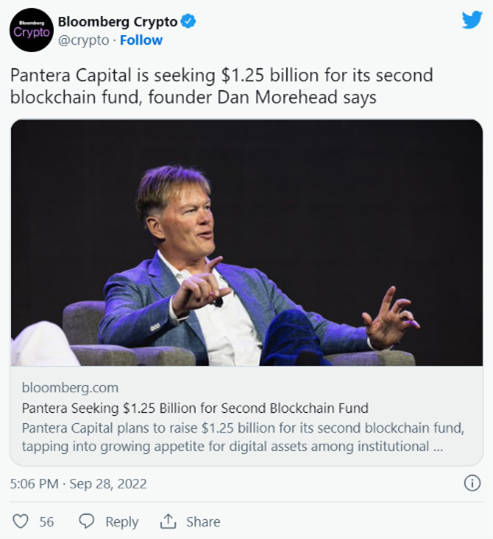 Additionally, the CEO mentioned that he wants to purchase more shares of some of the businesses in which Pantera has already invested but whose valuations have declined. This includes companies like FTX, Anchorage Digital, Amber Group, Coinbase, and Flashbots.

The fund's goal is to support investors in cryptocurrencies who might be beginning to lose hope due to price declines in 2022, which have been further impacted by the general decline in global financial markets.

The Pantera CEO said, "We want to provide liquidity for people that are kind of giving up because we're still very bullish for the next 10 or 20 years."

"Unfortunately, crypto pricing has become correlated with risk assets, which I don't think has to be true. I hope that soon crypto will decouple from the macro markets."

The investment firm has grown to be one of the most active in the crypto space since its launch in 2013, with currently $4.5 billion in assets under management.

The first blockchain fund launched in 2021 to raise $600 million. The firm announced in January 2022 that it had secured more than $1 billion in commitments. This active investment invests in a mix of venture equity, early-stage tokens, and liquid tokens.

Morehead claims that the firm's second fund will invest in equity and digital tokens. Pantera anticipates that investments will be closed in May 2023.