Before we look at the Phala price prediction, let's understand the netwrok. The Phala Network is a decentralised cloud computing protocol that aspires to compete with traditional cloud computing services like Google Cloud and Amazon AWS.

Cloud computing is the operation of large, web-based data repositories that provide computing resources to end users, such as data storage and computing power. Excess capacity from everyday computers can be used with the Phala network, resulting in a more distributed approach to cloud computing and storage.

Phala intends to provide these services via a decentralised, global network of computing resources that can scale for performance while maintaining confidentiality and security.

To accomplish this, the network employs two types of "worker node" participants who allow the network to function:

The network benefits from using two different types of nodes to divide consensus and computation responsibilities.

The Phala team launched Khala (PHA) on the Kusama network to provide a cloud computing network on its platform. In July 2021, Khala secured the fourth parachain slot auction.

Since 2019, the company has raised $1.68 million through two rounds of private token sales, resulting in the distribution of 15% of the initial token supply to investors. Three Web3 Foundation grants were also awarded to the project.

The prime objective is to create a general-purpose smart contract platform that always protects the security and privacy of its users.

For this, Phala Network promises the following features:

How does Phala function?

Furthermore, Phala believes that as a parachain, it will be quick to connect to the other parachains built in the Polkadot ecosystem. The computations required to ensure transaction validity and network integrity are performed by participants, who send requests to the network as transactions, and miner nodes.

To ensure confidentiality, work on the miner node's CPUs is done within a secure enclave known as a Trusted Execution Environment (TEE). This encrypted area within most modern computer processors ensures that even the mining machine's owner cannot see or tamper with what is stored inside their computer's enclaves.

Phala gatekeeper nodes act as a middleman, establishing end-to-end encryption between users and CPU miners while ensuring transaction privacy. When the data reaches the secure enclave, it is decrypted and executed. The information request's results are then re-encrypted before being sent out of the enclave.

According to Phala, any computation run on the platform is private and versatile across use cases, whether machine learning data for enterprises or smart contract execution for DeFi apps.

Phala, for example, used its technology to develop Web3 Analytics, a platform that collects and securely processes personal data. In that case, confidential smart contracts can only perform data analyses on this data if the users authorise it, giving them complete control over their data.

PHA is the Phala Network's native utility token and is used in its cloud-based economy. The PHA token, with a maximum supply of 1 billion, aids in network security and governance mechanism.

PHA allows any participant to purchase computing resources and services, whether an external blockchain in need of resources or an individual looking to store data securely. In turn, those who provide resources to secure the network can be compensated in PHA.

Additionally, PHA is used by gatekeepers and miner nodes, who need to stake their PHA to carry out their tasks. Staking guarantees that if they act maliciously, their staked PHA will be slashed as a punishment.

Finally, anyone who purchases PHA can become a stakeholder and participate in the parachain's on-chain governance, which means they can vote on any proposed changes to the Phala network. 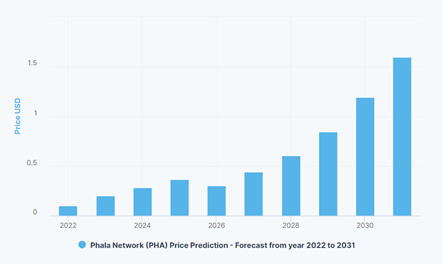 Phala Network is committed to a new security scheme that combines the power of blockchain and its proven robustness with security systems embedded in hardware to provide users with greater privacy.

However, Phala Network is a project still in the works with enormous potential, mainly because of its commitment to private smart contracts, which can significantly impact companies and services focused on security. As a result, it is a project that both users and business services concerned about privacy will be interested in.