Before exploring the Shiden Network price prediction, we need to understand what Shiden is.

Shiden is a Kusama-based smart contract platform for decentralised applications (DApps). It was designed to support "layer 2" solutions, secondary frameworks built on top of existing blockchains to improve network scalability and transaction speeds. The network is intended to function as a parachain on Kusama.

Parachains are user-created blockchains linked to Kusama's Relay Chain, the network's main blockchain. The Relay Chain handles Kusama's shared security, consensus, and transaction settlements. Parachains benefit from the Relay Chain's base features by being integrated into it.

The project is only the beginning of a much larger project: Astar (formerly known as Plasm). Shiden serves as a "Canarian network" or "test network" for Astar, whose goal is to provide a scalable and decentralised application development platform that defines and makes Web 3.0 a reality.

Astar is a protocol that runs on the Polkadot network and incorporates every feature thoroughly tested on the Shiden Network. In essence, we can say that Astar is a superset of Shiden's stable functions, with the platform serving as the space for the protocol's rapid developments.

The OVM module allows developers to customise their scaling design. Projects can use Plasma or rollup types, such as optimistic or zero-knowledge (ZK) rollups, to connect their application layers to Shiden's base layer. The layer-2 solutions store data and regularly commit state transitions on a layer-1 chain.

The base layer built using Substrate is the parachain that connects to the Polkadot Relay Chain. Shiden includes support for Substrates' native WebAssembly VM and an EVM module for smart contracts written in Solidity or Vyper.

Shiden Network also includes an X-VM (Cross Virtual Machine) that aims to make the two VMs on the network interact with one another.

Shiden's native cryptocurrency, SDN, is used for staking and rewarding nodes, paying transaction fees, and rewarding DApp operators. It has a critical role in maintaining and operating the Shiden network. 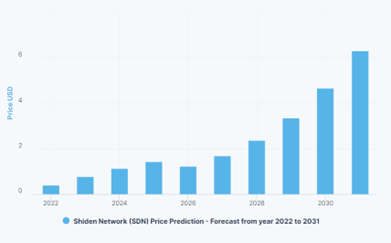 According to DigitalCoinPrice's price prediction, SDN price is expected to reach an average of $0.35 by the end of 2022. Additionally, the data shows that SDN's price will reach $1.35 in 2025. Comparatively, the coin does not appear overly bullish until 2030, when its average value is likely around $4.60.

Is Shiden a good investment?

Looking at the Shiden Network price prediction, there is no universal consensus on whether future SDN price movements will be positive or negative. Indeed, future potential growth depends on various factors, including announcements, new technological solutions developed by Shiden projects, the crypto environment in general, legal status, and so on.

Shiden and its sister network Astar provide a distinct offering within the Kusama/Polkadot ecosystem. Not only for the unique ability to deploy DApps on multiple chains very easily and fully integrated with Substrate technology, but also for the incentive policy for DApp creators, which no other blockchain offers.

Furthermore, the DApps Rewards system is one of the protocol's most notable features. Not only because of the tremendous support it offers DApp developers, but also because of the opportunity it provides users to nominate and place their trust in said DApps while also receiving benefits for such trust.

Shiden is a project currently under development, and its development is closely related to what Kusama can provide for its users.

Acala Coin Use and Value Explored