Solana wallets are experiencing a severe cyberattack that has nearly drained $8 million. A leading SOL-based NFT marketplace, Magic Eden has sent an alert to its users to cancel permission for dubious sources. The marketplace has pointed out that there has been a widespread exploit on the SOL blockchain.

Many Solana wallet holders are reporting a loss of funds on Twitter. The funds from these wallets are being transferred to an unspecified address. However, some users have claimed that the wallet where all the SOL funds are drained is “Htp9MGP8Tig923ZFY7Qf2zzbMUmYneFRAhSp7vSg4wxV”. 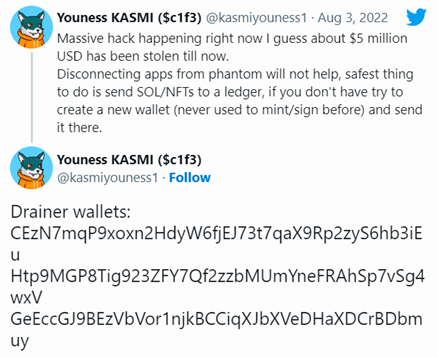 Mainly, the hot wallets are being targeted. Therefore, the hot wallets on Phantom and Slope are at the risk of being hacked and drained. So far, these wallets, including Magic Eden, are the firms that have reflected on this hack.

Phantom has ensured that it is working with its team to gather the information regarding the hack. Also, it has clarified that the hack is ‘Phantom-specific’. Likewise, Slope commented on the hack and said its team is working to identify the issue. Moreover, Slope is also updating its users regarding the developments.

On the other hand, Magic Eden has also confirmed the breach in the SOL blockchain. Moreover, it has provided directions for its users to keep themselves safe from the cyberattack. Magic Eden has firstly directed to cancel permissions to unverified sources. Secondly, the marketplace has suggested transferring the Solana wallet funds to either a new or cold wallet. 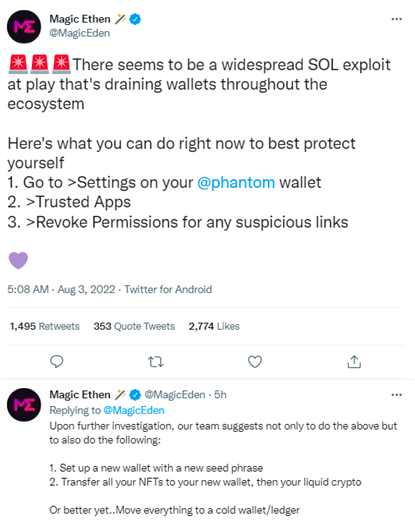 Though there is limited information regarding the breach, some speculate it to be a ‘supply chain issue’. PeckShield, a blockchain investigator, has pointed out that the supply chain has been breached before to steal the private keys. This could be the reason behind the Solana wallet hack that transferred funds to an unknown address.